On the 4th of Rabī’ Al-Ākhir, King Khalid University Rector, Prof. Falleh R.M. Al-Solamy, inaugurated the university's first operational solar power station. The power station was designed and constructed by students in the Faculty of Engineering. Supervising the efforts was Dr. Abdulaziz bin Salah Al-Saidi. Supporting the efforts were the Permanent Renewable Energy Committee, the University Engineering Consulting Office, and the Technical Company.

At the beginning of the event, His Excellency Rector Al-Solamy was introduced to the detailed schematics and drawings of the power station and was presented with a detailed explanation of the project's mechanism and capabilities. Dr. Abdulaziz bin Salah Al-Saidi then explained that the power station is a significant step towards having the university generate its own sustainable electric power. He further noted that sustainable energy is a primary goal of Vision 2030 that is of great scientific, economic, and social importance.

Rector Al-Solamy praised the efforts of the students, the supervisor, and the entire Department of Electrical Engineering in the Faculty of Engineering. Rector Al-Solamy also noted that this power station is a pilot project and learning tool towards future power generating facilities within the university system, most notably at the new Al-Fara University City Campus.

Rector Al-Solamy: 'This power station is a pilot project and learning tool towards future power generating facilities within the university system'.

Rashid Ayman, Electrical Engineering student and member of the project, thanked Rector Al-Solamy, and Faculty of Engineering Dean, Dr. Ibrahim Falqi, for their dedicated contributions and support throughout the project from conception to achieving operational status. The students also thanked each and every individual and organization outside of the university who provided support and encouragement that helped the project come to fruition.

Currently, the pilot power station generates 11 megawatts of electricity per year using only solar energy. This is enough to power the laboratories and workshops in the Faculty of Engineering. This achievement is a small but significant milestone for the College of Engineering and King Khalid University. 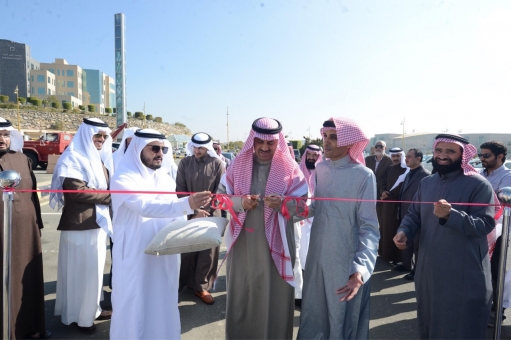 The College of Engineering and the Education for Employment Community (EFE) are looking for a way to collaborate for the training and development for the students.

In cooperation with Shell, the College of Engineering provided a training course for college students titled: The international Program Nxplorer

The seminar will be presented by Faculty members: Industrial Engineering Department

In cooperation with Shell, the College of Engineering offers two training courses for college students